CONGRATULATIONS TO FORESTIA AND JUNGALIA WHO TIED AS THE WINNING REALMS WITH 205 TERRITORY HEXAGONS EACH!
CLICK HERE FOR A POWERPOINT TO CELEBRATE THIS YEAR'S QUEST
(Be sure to click on "Slideshow" and  then "From the Beginning" so that the links work!)

Citizens in each of the winning realms who had approved projects have been sent a secret code on Seesaw to play a challenge vortex game all about the QUEST FOR THE KINGDOM!
Have fun!
​
​
You can watch a brief video here which shows how to upload a project to the Padlet.

Once upon a time, in the Kingdom of Athenia, a great battle ensued between two dragons. The fiery red dragon and the greedy green dragon were focused on only one thing…each sought to pilfer the kingdom’s books so that their masters would have all of the knowledge and stories contained within the vast treasure trove.  During the final battle, the force of the dragons’ powerful wings generated such strong gusts of wind that all of the books were scattered throughout the kingdom and lost.

Hundreds of years later, four leaders emerged from within the kingdom. Queen Forestia, Princess Meadowsia, Queen Mountasia,and  Queen Jungalia each claimed a territory of their own. Each of these leaders decided to rally their citizens and recover the lost books. In order to regain the treasure of these stories, their citizens would have to find the books, read them, and then share what they loved through a project for all to see. ​

The territory leaders agreed that as their citizens shared their stories, they would be rewarded with a parcel of the kingdom’s land. The leaders waged a challenge amongst themselves to see which would reign over the kingdom and thus began the
Quest for the Kingdom.
​

REALMS
Returning students will continue in the realm to which they belonged last year and will start the year at whichever rank they ended with last year.
Students who are new to Abbotts Hill will select an envelope from the Sorting Chest during their first visit to the Learning Commons. Within each  envelope, students found one of four postcards assigning them to a realm: Forestia, Meadowsia, Jungalia, or Mountasia. This will be their realm for their career at Abbotts Hill.

Each realm has a leader who is a staff member at Abbotts Hill and they will be encouraging their "citizens" to read fiction books (picture books for 1st graders and chapter books 2nd-5th graders) and share what they loved about their book through a project. Non- fiction books and graphic novels cannot be used for Quest for the Kingdom projects.
​
Each realm also has a "court" comprised of staff members throughout the school who are committed to encouraging all of our students to read, create, and upload their projects to the Padlet!

PROJECTS
There are 15 project choices.
A submitted project must demonstrate a student's best efforts, but should not be overly time consuming.
Click HERE to view examples of excellent projects in each category that were submitted last year.

​The project list is available here along with the rubrics that judges will use to assess the project. Please  carefully review the project descriptions and rubrics to ensure that projects are completed correctly.

Each student project is judged according to the rubrics mentioned above.

When a student's project meets the criteria on the rubric,
he/she will have earned a TERRITORY HEXAGON for their realm and will be on the path to advancing in rank..  TERRITORY HEXAGONS will be added to the giant banner outside of the cafeteria for all to see!

Projects submitted by Friday will be reviewed by the judges by the following Monday  to determine territory hexagon awards and rank advancements.

Projects that meet the criteria outlined on the rubric will be marked on the Padlet with the heading "Territory Hexagon Awarded".  Other students can then use those projects as examples and inspiration!

Projects that do NOT meet the criteria will be removed from the Padlet and the student will receive a slip explaining what they need to do to fix the project and resubmit it.

Each student project must be uploaded to THEIR REALM'S PADLET, which is similar to an online bulletin board

There is a unique PADLET for each of the realms
(Forestia, Meadowsia, Jungalia, or Mountasia).
Padlet QR codes are in each student's homework folder or agenda.

​Each realm is trying to win the kingdom, so the more hexagons that are earned, the closer the realm is to winning the challenge!

All students who are in the winning realm and have achieved their maximum grade level rank will become "Noble Coaches" who will assist others in the Quest and will be eligible to participate in special celebrations at the end of each semester! 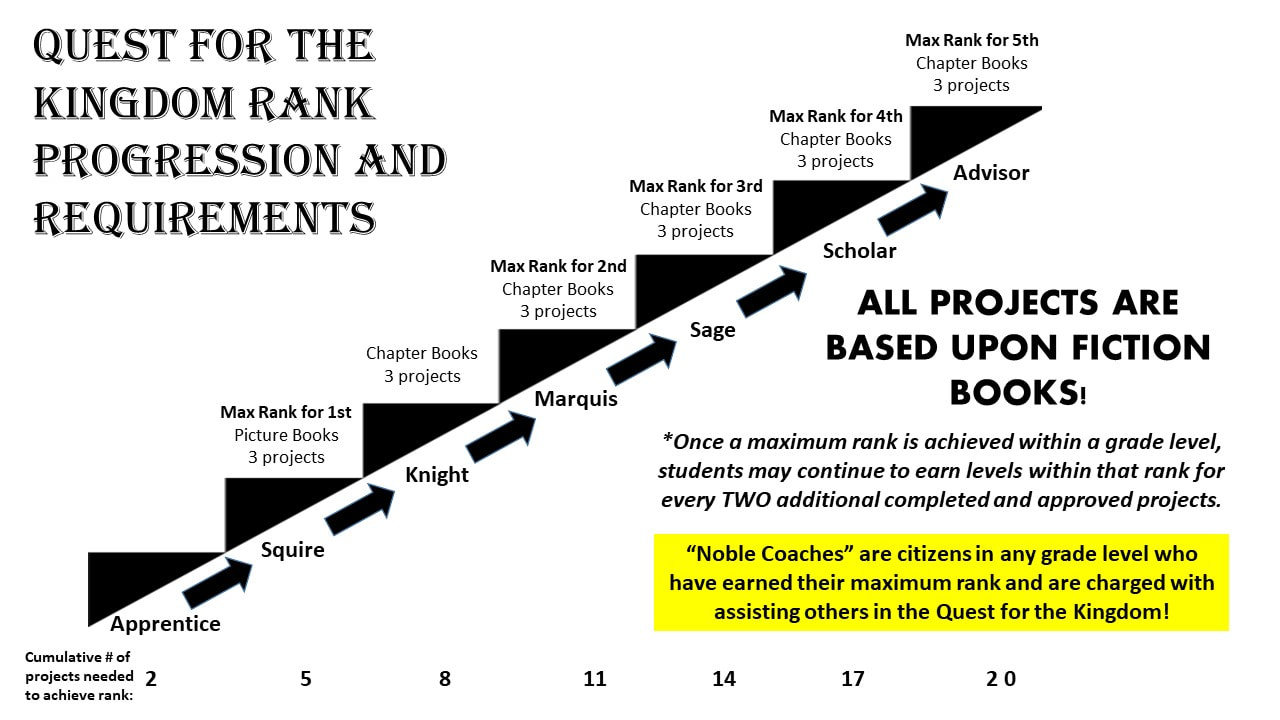 Each Friday, students should wear a shirt that matches the color of their realm (Forestia, Meadowsia, Jungalia, Mountasia) if possible. They will also proudly display their rank via the buttons they have earned. Realm posters will be displayed at the entrance to each grade level hallway to proclaim the  names of those citizens who have helped their realm in the quest by earning ranks!
​
This allows students to develop a sense of community with others across all grade levels who are in their realm and provides a visual incentive to work toward achieving ranks and earning badges and levels!